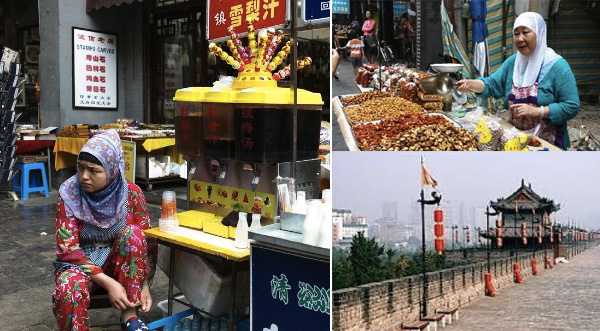 Arrive in Xi’an; your tour guide met us at the airport. After lunch, we will go to visit The City Wall; it’s the most complete city wall that has survived in China, as well being one of the largest ancient military defense systems in the world. Afterwards we have free-time to shop on Moslem Street. After dinner, we check into hotel. 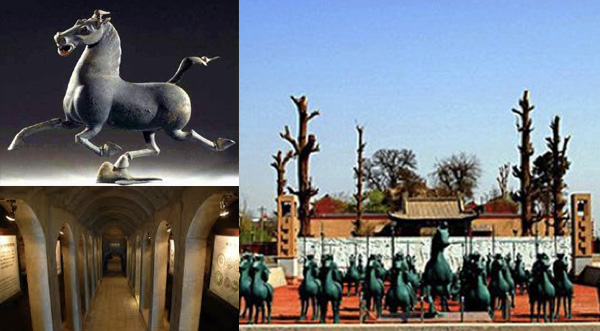 After breakfast, transfer to airport for Lanzhou, Lanzhou tour guide will meet us at the airport and take a bus* to Wuwei, you will go to visit the Leitai Tombs of Han Dynasty — the town’s single most famous bronze sculpture, the Han-dynasty’s “Galloping Horse Overtaking Flying Swallow” (Flying Horse of Wuwei), which was unearthed in 1969. After dinner, we check into our hotel. 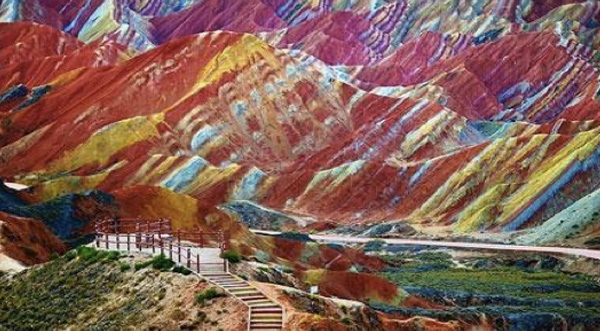 After breakfast, we go to visit The West Xia Museum located east of West Xia Imperial Tombs in Yinchuan, which was the first museum in China to display the history of the Western Xia Dynasty. Covering 3570 square meters, the museum exhibits the rise and fall of the Western Xia Empire through artifacts, pictures, frescos and paintings. The most precious articles in the museum are the West Xia Stele, Muyuan Pagoda and several wooden screen paintings of Western Xia, all of which are regarded as national treasures. Then we take a bus to Zhangye, visit The Zhangye Danxia National Geological Park (including Electric Car), also known as Zhangye Danxia (Landform) Geopark, located near the city of Zhangye in China’s northwestern Gansu province. It covers an area of 510 square kilometers (200 sq mi). Formerly a provincial park and scenic area, it became a national geopark in November 2011. Known for its colorful rock formations, it has been voted by Chinese media outlets as one of the most beautiful and geologically significant land formations in China. After dinner, we check into our hotel. 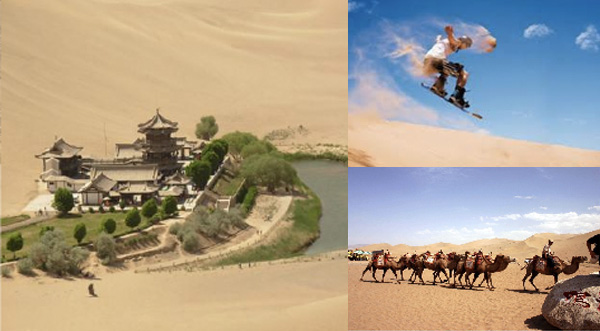 After breakfast, we transfer to the train station for Liuyuan, then take a bus to Dunhuang, and go for a camel ride along the Echoing-Sand Dune to reach Crescent Lake. When the sun is about to set, the vast desert, the limpid lake and the leisured camels together constitute a harmonious picture. If you are interested, you may try sand dune sliding there. 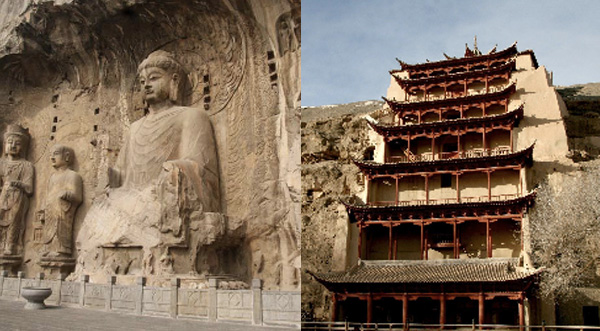 After breakfast, we will take a bus to go to visit the Mogao Grottoes. The murals and statues in Mogao Grottoes are a gleaming gem of world civilization and has tremendous value regarding research in Buddhism. After lunch, we will transfer to a train station for Turpan. In the evening we will enjoy a Whole Roasted Lamb. Afterwards we check into the hotel.

Arrive in Turpan, after breakfast, you will go to visit Flaming Mountain, The Flaming Mountain is very popular thanks to the Ming Dynasty (1368-1644) novel: “The Journey to the West”. Writer Wu Cheng’en and its hero the Monkey King. Surface temperatures at Flaming Mountain can exceed 70°C. With the scorching sun directly overhead, the red rocks glow and the atmosphere shimmers in the heat, as if surrounded by raging flames, hence the mountain’s name. The temperature in summer can reach 47.8°C, so take plenty of sun-block and water when you visit. We then go visit the Emin Minaret, one of the finest buildings on the Silk Road, then go on to visit the Grape Valley. Famous for growing all kinds of fruits such as melons, peaches, pears and particularly grapes, Grape Valley is filled with walkways. In the peak season of July and August, the valley is covered with bunches of grapes. The area produces the famous seedless white grape, the manaizi or mares nipple grape. In the valley there is a park as well as patios and outdoor tables where visitors can eat grapes and other fruits. Under the twisted vines are many stalls selling kebabs, steaming noodles and dried raisins.

In addition, the Uygur people’s singing and dancing show is displayed everyday. After lunch, we will visit the Jiaohe Ruins, it is situated to the west of Turpan, an ancient city on the Silk Road. With a history of 2,300 years, the Jiaohe Ruins lies between two rivers on a plateau atop a cliff more than 30 meters high. It is the largest, oldest and well-preserved earthen city in the world. Jiaohe was the capital of the former Gushi Kingdom, which was first built in 60BC, to the west of Turpan city. As early as 1961, the Ancient City of Jiaohe was listed in the first group of Key Cultural Relics Units, and was put under State protection. When traveling here, be sure to take plenty of water, as we will walk for several kilometers on dry, barren land.

Then we will go visit The Karez Water System, a unique water system in Xinjiang region that is still functional until this day. This long-lasting water system not only solves the drinking water needs of the local people but also provides water for wild animals. On top of that it prevents the Aiding Lake, located in the lowest point of Turpan basin, from drying up and becoming a desert – providing a balance between the local fauna, economical development and zoological value. Afterwards we take a bus to Urumqi. 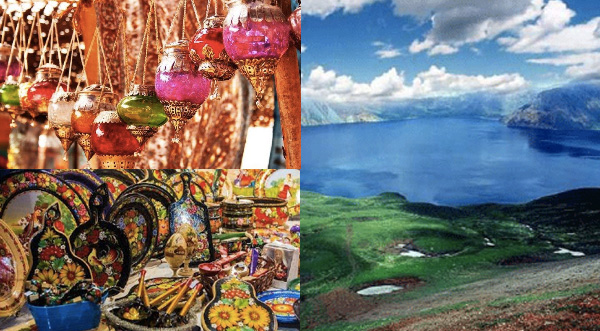 After breakfast, you will go to visit “Heavenly Lake (include electric car and boat)”, located in the middle of the Bogda Peak, 110 km (68 miles) east of Urumqi. Covering 4.9 square kilometers (1.89 square miles), this crescent-shaped lake has earned the name Pearl of Heavenly Mountain (Tianshan Mountain). As the Heavenly Lake is an Alpine lake with snowmelt as its water source, in summer, the beautiful place is an ideal cool resort. Boaters on it see the ever-changing silvery mountains soaring into the blue skies, their slopes highlighted by verdant pastures and eye-catching wild flowers. Fishing at dusk has its own special charm. A day in this fairyland promises restoration. Heavenly Lake, a relic of the Quaternary Period Glacier and its surrounding geological relics, offers science lovers exploring opportunities.

After we go visit the International Bazaar, with numerous buildings and structures that make up the Urumqi International Bazaar, covering an area over 1 000 000 square meters. This huge construction features the main bazaar (398888 square meters), a banquet hall (6100 square meters), a delicacy square (8000 square meters) and an open-air performance plaza (3000 square meters). In the midst of all this stands Xinjiang’s first sightseeing tower topping out at 80 meters. The bazaar also features an Islamic mosque. The buildings and general area are constructed in Islamic style representative of the preponderant religion and ethnic culture of the western region. The Bazaar is often referred to as a “city within a city”. After dinner we fly to Xi’an. 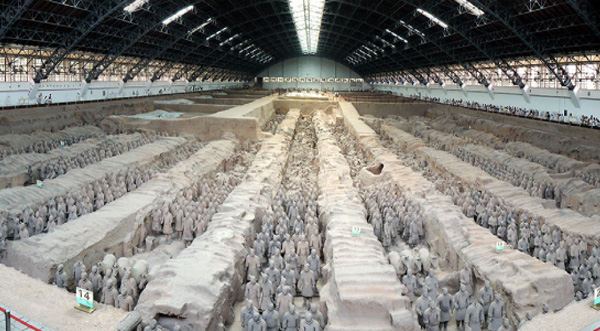 After breakfast, we will go to visit Emperor Qin Shihuang’s Mausoleum and The Terra-Cotta Warriors and Horses Museum, Emperor Qin Shihuang (259-210B.C.) had Ying as his surname and Zheng as his given name. He inherited the throne of Qin at age of 13, and took the helm of the state by the age of 22. By 221BC he had annexed the six rival states of Qi, Chu, Yan, Han, Zhao and Wei, and established the first feudal empire in Chinese history. After lunch, we will transfer to the airport for Hong Kong.